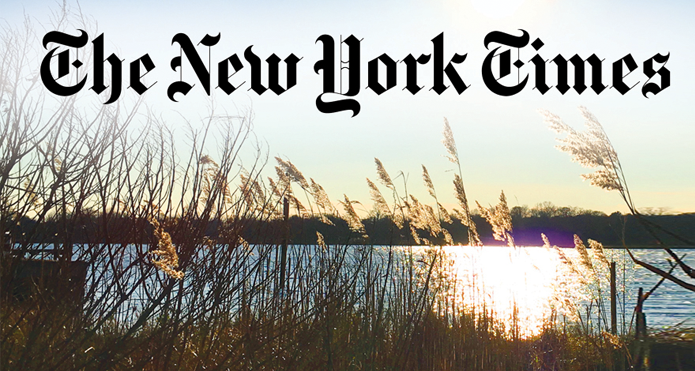 When Sally and Fred Burgess wanted to downsize in 2007, after their children left home, their first thought was to move to Center Moriches, a seaside hamlet in Suffolk County west of the Hamptons.

“We wanted to be nearer the water,” said Ms. Burgess, 50, who had been living with her husband in nearby Manorville. Just as crucial to their decision were Mr. Burgess’s warm memories of growing up in Center Moriches. “It was all he talked about,” she said.

After the couple bought a 1959 three-bedroom one-bath house for $349,000 and moved in, she came to see why Mr. Burgess, 53, a packaging supervisor for Newsday, was so enthusiastic.

“It’s a throwback,” said Ms. Burgess, who works for a state agency in Suffolk County. “We have neighbors who look out for each other. It’s a wonderful, wonderful place.”

Though there are some mansions, she said, many homes are modest — certainly compared with those in the Hamptons — and attract young families. Nearly everyone lives there full time.

At first, Ms. Burgess said, she and her husband did not know their house was part of a 508-lot development, Holiday Beach, with its own neighborhood association.

“We knew there was a beach, but we didn’t know much about it.” That soon changed. “When you’re mowing your lawn, everyone stops and says hello,” Ms. Burgess said. “Someone said, ‘Hey, we have a clubhouse.

Come on down and meet everyone.’ So they did, and six and a half years ago, she became president of the association, which has Friday-night gatherings and other activities.

Living In A 55+ Community In Center Moriches

The rest of the hamlet, she said, is just as friendly. Daniel J. Panico, 37, a councilman in the Town of Brookhaven, of which Center Moriches is part, said the hamlet has the “small-town feeling of what Long Island used to be.”

He and his wife, Deanna, 30, a lawyer who works in Mineola, moved in 2014 to Center Moriches from Manorville with their son, Grant, now 2, paying $500,000 for a three-bedroom one-and-a-half-bath house on almost an acre bordering a creek.

Center Moriches has become less rural and more residential in recent decades, said Herbert J. Strobel, 53, who runs the 28-acre Thee’s Dairy Farm, which has been in his family for nearly 100 years.

He grew up milking cows on the farm, then earned three degrees in animal sciences and microbiology at Cornell University and taught at the University of Kentucky. Then, about 10 years ago, Mr. Strobel returned to the farm, where he now grows hay and raises a few sheep; the milk business is no longer viable, he said.

When he was growing up, Center Moriches “was known as a very sleepy waterfront community,” he said. It is still slow-paced, he said, “but everything is relative.”

Residents include scientists who work at Brookhaven National Laboratory. He said, “considering how many trade trucks I see coming back from the Hamptons,” many provide services there. Center Moriches is not the Hamptons, Mr. Strobel said, but whether it is part of the East End of Long Island “depends on who you talk to.”

“If they moved out here from, say, Hicksville, they call it the East End,” he said. “If they make another hop and move to Southampton, then it’s not anymore.”

What You’ll Find In Center Moriches

A hamlet, or unincorporated area, Center Moriches stretches from Sunrise Highway on the north to Moriches Bay, where four jagged fingers of land separated by long creeks reach out toward Fire Island.

Covering 5.6 square miles, it is bordered on the west by Center Moriches and East Moriches. Of the three communities, it has the most shops and restaurants along its Main Street, which is part of Montauk Highway. The census bureau estimated its 2014 population as 8,363.

According to Mr. Panico, the Brookhaven councilman, the town is now rezoning to avoid “overdevelopment, the retail sprawl common to the west.” The town also recently refurbished the 13-acre Kaler’s Pond Park, a pond where people may fish, two playgrounds, and a memorial to the 230 people who died in 1996 when TWA Flight 800 exploded over the ocean near Center Moriches. (Another memorial is in Mount Pleasant Cemetery nearby.)

The section of the hamlet toward Sunrise Highway on the north is filled with modest homes, a little new construction, and some industrial locations. Marinas, private docks, and beaches dot the southern area.

But, the hamlet’s most notorious spot is Lindenmere, a bayfront estate that in the 1980s belonged to the Philippine dictator Ferdinand Marcos and his wife, Imelda. Once a hotel, it is now refurbished by a new owner, Janet Davis, as an upscale bed-and-breakfast.

The median sales price for single-family homes for the 12 months ending July 31 was $339,500, according to Vivian DeBlasi, a broker with Gateway to the Hamptons Real Estate. This increased about 7 percent over the median for the previous 12 months, said Ms. DeBlasi, based on Multiple Listing Service of Long Island statistics.

What to Do In Center Moriches

Terrell River County Park has 263 wooded acres for hiking and bird watching. Webby’s Park, a town park on the bay, has the only public beach in the hamlet, a playground, and picnic tables. The Terry-Ketcham Inn, a former farmhouse and tavern, is being restored by the Ketcham Inn Foundation, and guided tours are available on weekends, said Bertram E. Seides, the foundation’s president.

An adjoining bookstore is a gathering spot that is open most days. Nearby, the Moriches Bay Historical Society, of which Mr. Seides is also president, maintains another house museum, the Havens Homestead, built-in 1740, which hosts concerts and other outdoor events.

In another area, the Masury Estate Ballroom, a national landmark built about 1898, is now owned by the Holiday Beach Property Owners Association and opens for tours on Sundays from 10 a.m. to noon. Kayaking, sailing, and bike riding are popular pastimes.

Most homes are part of the Center Moriches School District, which has 1,645 students, said Russell J. Stewart, the superintendent. The district has one elementary school, one middle school, one high school, and universal prekindergarten.

The drive to Manhattan can take two hours, even without heavy traffic, residents said. In addition, the hamlet has no Long Island Rail Road stop; residents often drive about a half-hour to the Ronkonkoma station, or about 15 minutes to the Mastic Shirley station, on a different line.

The History Of Center Moriches

The Terry-Ketcham Inn, on what was once called the Kings Highway (now Montauk Highway), started as a cottage in the 1600s, and grew with four additions from circa 1700 to 1790, when a tavern was added.

In 1791, Thomas Jefferson and James Madison stayed there on a trip to visit Gen. William Floyd in nearby Mastic, according to a Ketcham Inn Foundation pamphlet. During the Civil War, military volunteers drilled at the inn. The site is a town, state, and national landmark.

Newest Post
What Are The Problems With Over 55 Communities, Or Is Buying A 55+ Home A Good Investment For You?
Next Post
How To Buy Co-Ops and Condos on Long Island